The Giver (Jeff Bridges) gives The Receiver Jonas (Brenton Thwaites) all of the distant memories of what is now our current world, which motivates Jonas to break free out of their dystopian society.

With the help of Fiona (Odeya Rush), who works in the society’s nursery of newborns, and is later taken into custody, Jonas takes Gabriel (The future Receiver) who was classified as an Uncertain, and deemed to be executed, to the edge of the boundary of their society which is off limits. The Giver stated that if Jonas reaches the edge, all of those memories will be returned to the society members.

As Jonas travels towards the boundary with Gabriel, his childhood friend Asher (Cameron Monaghan), a drone pilot, locates him and is set to destroy them both. Jonas pleads with Asher saying that if he’s truly his friend, to trust him and to let him go. Jonas starts to run, but Asher’s drone captures Jonas and Gabriel. The drone starts flying away but to Jonas’s surprise, Asher drops them into a river, escaping.

Back at the society, Fiona is confined and is scheduled to “Be Released” which is their way of saying, executed.

While in her cell, Fiona explains to Jonas’ society Mother (Katie Holmes) that Jonas showed her things and that she felt feelings. Mother brings Fiona to Father (Alexander Skarsgård) who commences the executions but doesn’t realize what he’s doing.

At the same time, the Chief Elder (Meryl Streep) is sitting with all of the other elders, including the Giver, who explains that their way of a society is wrong, and that it’s not proper to withhold all of which the world has to offer. The Chief Elder disagrees and says that their society is peaceful, and it’s the only way. The Giver argues that it’s not her decision to keep love, beauty, passion and all of the wonderful things the world can offer from their society.

Also at the same time, Fiona is strapped to a chair and is about to receive the injection that will allow her to “Be Released”. Jonas, who’s still trying to make it to the boundary, jumps off a cliff and lands in a snowy forest. Gabriel is who crying, suddenly stops when he hears Christmas singing, the same singing from which Jonas has a memory of when he first met the Giver.

Jonas wakes up with snow falling on his face and sees a sled at the top of a hill. He gets on while holding Gabriel and he goes sledding down the hill. As they’re sledding, he comes to a distinct barrier wall that is glowing around their society. Just then, the Father is lowering the injection needle towards Fiona’s arm. Jonas crosses the barrier, and it disappears and it travels over the society, releasing all of the memories to the society members. As that happens, the Father stops the injection process and becomes overwhelmed with feelings. The society members and the elders have now regained all the memories back. As the sled stops at the bottom of the hill, Jonas arrives at the same log cabin that was in his memory with the Giver.

The last scene is Jonas walking to the cabin with Gabriel in his arms. 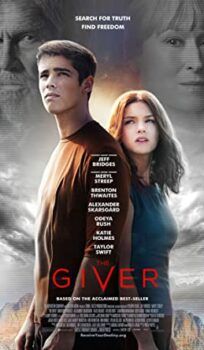