Sinbad’s battle with the Kali statue that Koura brought to life ends when it falls from a ledge and shatters — revealing the final golden tablet. Koura takes all three tablets as Sinbad and his party are captured by the Lemurians (since Sinbad has destroyed their idol) and heads for the Fountain of Destiny.

When Margiana pleads for the tribe to spare Sinbad’s life, they recognize the eye symbol on her palm…which indicates she is a destined sacrifice to a centaur who dwells in the caves below. They lower her down there and the monster carries her off. Sinbad has the disfigured, masked Vizier reveal his horribly scarred face to the tribe; the distraction allows the party to escape into the caves, where Sinbad finds Margiana unharmed.

The caves lead to the Fountain, and the party arrives to find Koura has already used one of the tablets to reverse the aging his spell casting had forced upon him. The centaur emerges searching for the party — but a griffin emerges too and battles it, as per the Oracle’s prophecy about the balance of good and evil, which can only be upset is through the interference of men. Koura wounds the griffin and the centaur kills it. He then commands the monster to kill Sinbad, but Sinbad manages to kill it.

Koura uses the second tablet and gradually turns completely invisible as he and Sinbad engage in a swordfight. When Koura stands within the Fountain itself, Margiana sees his silhouette and warns Sinbad. The hero strikes a killing blow and Koura drops the final tablet as he dies.

The waters clear and Sinbad discovers the final treasure of the tablets — “a crown of untold riches” that would make its owner king. Since Sinbad wants to be free to explore as well as choose who he shall marry (referring to Margiana), he gives it to the good Vizier, and it magically restores his face. The heroes sail home. 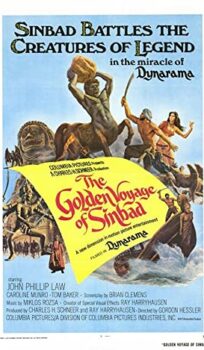