Capt. Jake Geismar (George Clooney) is an American war correspondent who returns to Germany to cover the Potsdam Conference following the German surrender in WWII.  His assigned driver is Corp. Tully (Tobey Maguire), who is involved in the black-market and is trying to get his girlfriend Lena (Cate Blanchett) out of Germany.  Lena is also Jake’s former girlfriend from before the war and was left behind when the war began.  Lena, a German Jew, says that she’s still alive by doing whatever it took, including prostitution.

After Tully is found dead with 100,000 Reichmarks on his body, Jake begins a clandestine investigation of his death as well as why the Americans and Soviets are looking for someone named Emil Brandt, whom Tully may have known about.  Emil was a former SS officer who was also the secretary for Franz Bettmann.  Bettmann was the Chief of the V2 rocket program, and both sides want him to help with their rocket program.  In addition, Bettmann was also the head of the Dora concentration camp where the rockets were built.  It’s also revealed that Emil is Lena’s husband, and she is hiding him.  The Americans already have Bettmann in a safehouse, and they want Brandt to assist with the program.  In reality, they want Brandt so that he can’t come forward with the truth about Bettmann.  Brandt had taken notes of everything that had happened at Camp Dora.

Lena killed Tully because he was getting too close to the truth, and assured Emil that she would do the same to Jake.  In truth, Lena had no intention of killing Jake, but she wanted to use him to get out of Germany.  Lena even gives Jake Emil’s notes.  Jake convinces Lena to hand Emil over to the prosecutor of war crimes, but he is killed by those who want to keep Bettmann’s past a secret.  Jake goes to the prosecutor (who was involved with Emil’s death after all), and turns in the notes in exchange for a visa for Lena so she can finally leave Germany.  At the end, just as Lena is about to board the plane, she reveals to Jake that “whatever it took” involved turning in fellow Jews to the Gestapo in exchange for protection. 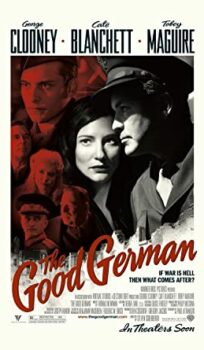