In the small French town of St Elzear, the church bells have not rung for years.  The church held the glove of St Elzear, a priceless jewel encrusted glove that was said to heal the sick.  It was looted during WWII, and the priest has vowed the bells will not ring until it is returned.  He is surprised when he hears the bells ringing.  He rushes to the church to find the glove in its place and no one but a dead man in the church.  All the townsfolk are amazed at this miraculous event.  The story of the glove’s return is told in a long flashback.

Michael Blake (Glenn Ford) is an American GI in France near the end of WWII.  He captures Count Rona, a Frenchman serving in the German army.  Rona offers a precious jeweled green glove, which he stole from the church, in return for his freedom.  Falling bombs cause the building to collapse, burying the glove.  Frantic to recover the glove, Blake sends a young boy on bike to tell the American artillery to stop firing at the church.  The boy is killed by bombs, but his mother tells Blake she is proud her son was lost serving a role in the war.

Several years after the war, Blake is failing at life.  He goes back to France to search for the buried glove that will make him wealthy.  Count Rona is now a wealthy dealer of stolen art.  He paid a government employee to let him know if Blake ever requested a visa to enter France.  Rona and his thugs demand the glove from Blake.

Blake and Christine, a tour guide, fall for each other, and she decides to help Blake.  When they return to search the church, Rona’s thugs attack them.  The thugs are frightened off by the arrival of an old couple, the same couple whose son died carrying Blake’s message.  The old lady has been insane since her son died.  The old man reveals that he had retrieved Blake’s locked briefcase from the church many years ago, and saved it, in case Blake returned.  Blake opens it and shows them the glove.  When the old lady holds the glove, she recovers her sanity.  Blake is impressed by their devotion to the glove, and the glove’s ability to heal the lady.  He decides to return the glove to the church.

Blake returns to the church, with Rona and his thugs pursuing him.  Blake flees up the bell tower.  The thugs are shooting at them, and they kill Rona.  Blake begins ringing the bell.  As everyone comes running to the church, the thugs flee.  Blake leaves the glove in its case, and jumps out a window.  We return to the opening scene where the priest finds the glove in its case, and no one but a dead man, who could not have rung the bell. 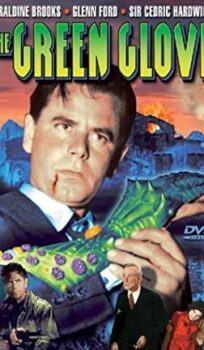