When Britt Reid’s (Seth Rogen’s) wealthy, newspaper-owning father dies, Reid inherits both the paper and the fortuneHe begins a friendship with his father’s mechanic Kato (Jay Chou) who is a genius and a martial artist. They both discover that they hated Britt’s father because he was stern and demanding of both of them. They decide to cut off the head  of the statute of Britt’s father that was erected by the city. While engaged in this act of vandalism, the two end up rescuing a couple from a group of violent muggers. When the cops arrive, they believe Britt and Kato were the muggers, and engage the pair in a high-speed chase. Britt and Kato eventually escape after destroying the pursuing police cars and decide that they will become vigilantes (The Green Hornet and The Man in Black respectively). They decide that the best way to end crime is by overthrowing the mafia-boss, Chudnofsky (Christopher Waltz), and running the criminal underworld themselves. This leads them to declare war on both criminals and the police.

In order to draw Chudnofsky out into the open, they begin publicizing the exploits of the Green Hornet and The Man in Black in Britt’s newspaper. Britt and Kato hire Lenore Case (Cameron Diaz) to work as their personal secretary at the newspaper. Lenore has a degree in criminology, so they secretly use her knowledge of the criminal underworld to effectively strike Chudnofsky where it will hurt him most. Both fall in lust with Lenore, and as a result, the two have a falling out and end their friendship and partnership.

Kato later discovers that the District Attorney Scanlon (David Harbour) is working for Chudnofsky (who has renamed himself Bloodnofsky) and that the two are planning to kill Britt due to all the press the newspaper has been giving to the Green Hornet. Kato suits up and saves Britt from the assassination plot, Chudnofsky, Scanlon, and their henchmen chase the heroes to the newspaper building. A large battle ensues. Kato kills Chudnofsky by stabbing him in the eyes with two wooden stakes. They then hit Scanlon with their car (which they had driven into the newspaper building), cause him to fall out the window to his death. They then reveal their secret identities to Lenore and ask her to work with them, and she eventually agrees. The trio continue their adventures after Britt and Kato sloppily re-attach the father’s head to the statue, having finally realized that he was a good man and was only pushing them to realize their potential. 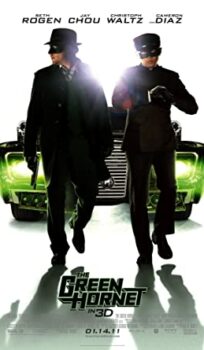