Eight men survive the plane crash in the Alaska wilderness. Lewenden (James Badge Dale) dies soon after from his injuries as Ottway (Liam Neeson) helps him accept his fate and watches him take his last, dying breath.

Hernandez (Ben Bray) is killed the night of the crash by a grey wolf when he takes a break from standing watch to pee.

Flannery (Joe Anderson) is killed by several grey wolves when he falls behind the group as they hike from the wreckage across the deep snow to reach the forest.

Burke (Nonso Anozie) can’t adjust to the altitude and dies of hypoxia.

Talget (Dermot Mulroney) dies when he loses his glasses and gets stuck on the makeshift line that the group attaches between the treetops and the cliff they are on. The line breaks and he plunges through the trees to the ground. The wolves drag his body away as he breathes his last breath.

Diaz (Frank Grillo) gets too exhausted to continue. He sits by a log near the river looking out at the mountains. We hear him take a breath. Crackling branches seem to signify that the wolves are approaching, but we don’t actually see Diaz die.

Hendrick (Dallas Roberts) falls in a river escaping the wolves and his foot gets jammed in some underwater rocks. Ottway jumps in the river, but fails to save him. We see Hendrick take his last breath before he drowns.

Ottway rails against God, asks for His help and when nothing happens he kneels down and looks at the pictures in all of the wallets that he has collected from the dead and adds his letter to his dead wife and his wallet to the pile.

The wolves surround him and Ottway concludes he is in their den. The black Alpha Male wolf challenges Ottway. Ottway tapes broken glass miniature alcohol bottles to one hand and a knife to his other hand. As Ottaway and the Alpha Male wolf leap at one another, the film cuts to black (sort of like “The Wrestler” meets “The Call of the Wild”…).

After the credits, we see the prone Alpha male wolf’s chest rising up and down as it takes its last breath. Ottway’s hand is on the wolf’s chest, he is apparently laying next to the wolf. It is left to the audience to interpret this scene. 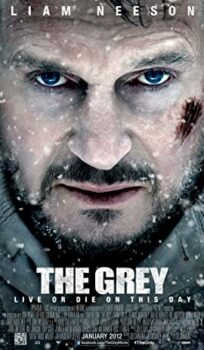