Submitted by Peter and Chris

The airborne neurotoxin that makes people kill themselves is being released by plants across northeastern U.S..

After a day of trying to escape the ‘wind’, Elliot (Mark Wahlberg), his wife Alma (Zooey Deschanel), and his best friend’s child Jess (Ashlyn Sanchez) escape to a rural townhouse where they wait it out until the “event” mysteriously stops. Jess’ father (John Leguizamo) earlier killed himself because of the toxins.

The toxin simply vanishes as quickly as it comes.

A newscaster later speculates it was nature trying to warn man against harming the environment, but retracts the statement as it only happened in one area of the globe.

In the final scene, two friends are walking along a park in France when everyone suddenly becomes affected. 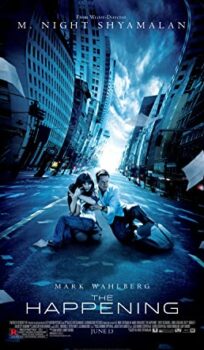