Pooper:
Although the cop that kills Khalil is never charged with a crime, Starr finds her voice and inspires protest. She also is able to successfully defuse a standoff between her family, the police, and a local drug gang without anyone being killed. Starr now lives authentically – both at her elite, mostly caucasian private school and at home.

Long Ending:
As a young girl, Starr and her brothers are given “the talk” by their parents, explaining how they, as Black people need to act when inevitably encountering police to stay unharmed (carefully and with absolute compliance). Years later, Starr (Amandla Stenberg) and her brothers Seven (Lamar Johnson) and Sekani (TJ Wright) live a happy but poor life in a lower-class Black neighborhood. Their father, a reformed ex-con/gang member, named Maverick (Russell Hornsby) owns a small convenience store. Their mother, Lisa (Regina Hall), who came from an affluent family, works as a nurse and ensures their kids stay committed to their education. Maverick and Lisa send them to a successful private school outside their neighborhood to ensure a good future for their kids. The students there are primarily wealthy and White. Although Starr loves school and has friends and a good boyfriend named Chris (K.J. Apa), she feels she can’t open up to them. She also feels shunned by the Black community for attending a fancy school with many white people.

One night, Starr goes to a party in her neighborhood with her good friend Kenya (Dominique Fishback). There, she reconnects with a childhood friend named Khalil (Algee Smith). She’s disappointed to find out he now works for the gang her father used to be in, the King Lords. She finds out that he’s only doing it to support his family as his grandmother was diagnosed with cancer and lacks health care. Khalil drives Starr home as they continue to reminisce and bond over the music of Tupac Shakur (who popularized the saying “The Hate U Give Little Infants Fuck Everyone,” aka Thug Life). The two share a kiss, though Starr quickly cuts it off, noting she has a boyfriend. As they drive, a cop pulls them over. Though Starr follows the officer’s commands, Khalil is difficult. The cop shoots and kills Khalil in front of Starr when Khalil takes out a comb that the cop assumed was a gun.

Starr comes under intense scrutiny as the lone witness to the shooting. Some of her friends at school blame Khalil for what happened, accusing him of being threatening. They also disrespectfully use protests as an excuse to cut class. The police and media seem more concerned with Khalil’s involvement with the gang than the cop that shot him. A victim’s rights activist named April (Issa Rae) wants Starr to publicly support protests objecting to Khalil’s shooting. The leader of the gang, King (Anthony Mackie), begins threatening Starr and her family as he’s concerned she’ll expose his drug dealings to the police. Her uncle Carlos (Common), who himself is a cop, tries to justify what happened. Lisa wants to move the family out of their neighborhood, and Maverick becomes increasingly confrontational with the members of his former gang who are threatening Starr.

Starr reflects that as a child, she witnessed another friend get murdered in the street (by a gang member) and refused to speak up then. Not wanting to fail Khalil as she did her other childhood friend, Starr eventually decides to testify against the cop at a grand jury hearing and agrees to a news interview where she publicly exposes King as a gang leader. However, the grand jury doesn’t indict the cop, and King beats up Seven in retaliation. Although Chris supports Starr (and the pair fully bond after Chris visits her neighborhood and meets her parents), many of her other friends disassociate with Starr. Starr joins April in a protest march where she gives a public and passionate plea for change. The police officers responded by tear-gassing the crowd and arresting the protestors.

Starr and Seven flee the protest to their father’s store. King follows them and lights the store on fire, with the teens barely escaping. Maverick and the rest of the family arrive, and Maverick gets into a fight with King. Unknown to them, Sekani (who is only 10) stole Maverick’s gun and pulls it out to aim at King. The police arrive and aim their guns at Sekani. Realizing the hate is about to fuck everyone, Starr jumps in front of her younger brother and pleads with everyone to stand down. They all do, and King is arrested.

The film ends with Starr finally being her authentic self at school, even if it costs her some friends. She and Chris still have a strong relationship. Their family still lives in their neighborhood and is rebuilding. 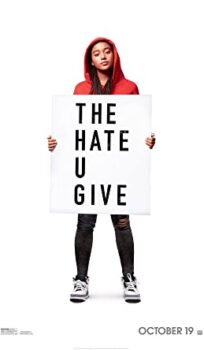