Bobby (Lewis Smith) succeeds in changing Lenny’s (Jason Gedrick) look, giving him confidence, and helping him get Sharon (Anne Sawyer), but Lenny eventually rebels against everyone, including his parents, and he shuts out Melissa (Nancy Valen), the girl he should really be with.

Bobby breaks the law of appearing only to Lenny and allows Emily (Jane Kaczmarek) to see him. They spend some time together, and Emily informs him that Lenny is actually their son. Bobby tells her he loves her, and then takes her home and kisses her goodbye. He then goes back to “Midtown” (limbo) with Rafferty (Richard Mulligan).

Bobby takes a peek at Rafferty’s passenger list for “Uptown” (Heaven) for the next day and finds Lenny’s name on the list. Rafferty tells him that Lenny accepted Gallo’s (Stephen Gregory) challenge for a drag race at the quarry, and the race will claim his life (this was also the same kind of race that killed Bobby). Feeling responsible for Lenny getting into this mess, Bobby decides to go back down to Earth to save him, and tells Rafferty that he will give up his soul to Hell in order to do this.

Lenny wins the race when Gallo gets out of his car, but he finds he can’t open his door when he tries to get out. Bobby then appears, and he gets Lenny out at the very last second before the car goes off of the cliff. Lenny, having seen the error of his ways, kisses Melissa and hugs his mom.

Lenny meets Bobby at the bottom of the cliff, and Bobby tells him he has to go now, but promises that they will always be friends. They share a goodbye hug, and then Bobby goes to Rafferty. He informs Bobby that his sacrificing his soul to save Lenny has secured him his ticket to Uptown. Bobby heads back to limbo with him, and then takes the escalator to Uptown. 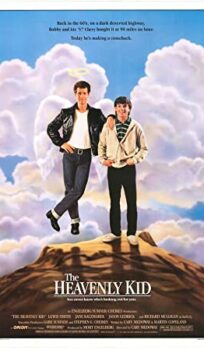