The title comes from an artificial hill in a British military prison in Libya during WWII that is used for “drill” so as to break a man’s spirit.

During World War II, the British have a military prison in North Africa for deserters, traitors and cowards.  The commandant spends his days drunk, sleeping or pursuing the native Bedouin women.  Junior officer Wilson is allowed free rein to run the camp savagely.  He encourages his more brutal staff sergeant Williams to torment the prisoners.  In the center of the camp stands a steep hill, which the prisoners are forced to run up and down, in full gear, in the hot desert sun.  The medical officer (Michael Redgrave) outranks Wilson, but in intimidated by him and subservient to him.   Sergeant Harris is the only decent officer.  Whenever he tries to get the commandant to act, Wilson threatens to charge him with treason and put him to march the hill as a prisoner.

Five new men arrive, and are put in a cell together.  Roberts (Sean Connery) is infamous for having beaten up his commanding officer, rather than follow a command to lead a suicidal charge.  One of the new men, Stevens, dies of heat stroke and dehydration.  The prisoners go on strike, and want Williams charged with murder, for forcing Stevens up and down the hill in the hot sun with no water.  Roberts, as leader of the prisoners, is “taken to see the commandant”.  He is actually beaten badly by several guards.  His leg is broken.

As the medical officer goes for a stretcher, the injured Roberts is left alone in a room with Williams.  Williams threatens to beat Roberts to death, rather than let him testify.  At that moment, Roberts cell mates return. They begin beating Williams.  Roberts pleads with them to stop.  If Williams is beaten, no one will believe the prisoners story.  Williams will be able to justify all his actions as self defense.  Roberts is unable to stop them, and desperately realizes they have now lost their case. 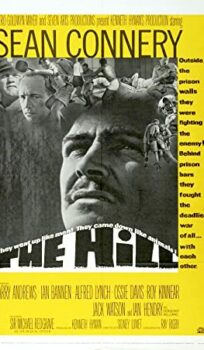