The Hitchhiker’s Guide to the Galaxy(2005)

The Hitchhiker’s Guide to the Galaxy

Zaphod Beeblebrox (Sam Rockwell) inadvertently signed the order for the Earth’s distruction when he thought he was signing an autograph for an admirer. In the process he thwarted his own search for “the ultimate question,” as the Earth itself was a giant computer, built by the supercomputer Deep Thought to calculate the question, and was just about to spit out the question when the Vogons demolished it. In the end, Slartibartfast (Bill Nighy) of Magrathea builds a new Earth from a back-up, and to make things up to Arthur Dent (Martin Freeman), offers to change anything Arthur would like before restoring life to pre-destruction “normal.” Arthur asks that it be an Earth without himself, and heads off to the Restaurant at the End of the Universe with Trillian (Zooey Deschanel), Ford (Mos Def), Zaphod, Questular Rontok (Anna Chancellor) and Marvin the Paranoid Android (Warwick Davis, suit; Alan Rickman, voice). 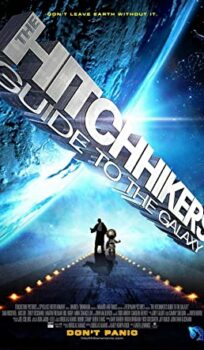