Amanda (Cameron Diaz) and Iris (Kate Winslet) switch places for two weeks during christmas after Amanda’s break-up with her boyfriend Ethan (Edward Burns), and after Iris’ discovery of her crush’s Jasper’s (Rufus Sewell) engagement. During the two weeks of exchange, Amanda meets Iris’ brother Graham, with whom she falls in love and later on finds out he’s a widowed man with two young girls; and Iris meets an old Hollywood writer, Arthur Abbott (Eli Wallach) whom she helps in various ways, and she also meets Miles (Jack Black), Amanda’s ex-boyfriend’s friend from work, with whom she spends some time and later on falls in love with.

When the time is almost up to leave, they both reach climax in each relationships, Amanda and Graham kind of break it off, while Iris and Miles are starting it up. They all end up together in England for New Year… and yes, Miles does gets to Arthur’s award in time… and Amanda does gets to cry, at last! 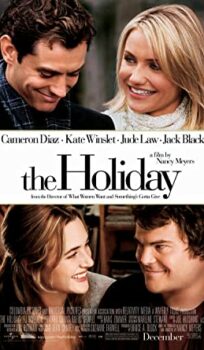