Greenberg’s father Abe (Zero Mostel), a crooked lawyer, took the jewel and has it stashed in his safe deposit box at a bank, where only he can get to it. Abe double crosses his son and makes a deal with the African Dr. Amusa (Moses Gunn). Amusa will give Abe millions of dollars for the jewel.

Dortmunder comes up with a plan to get the jewel first. He hires a female hypnotist named Miasmo (Lynne Gordon) to put the bank’s safe deposit box monitor under a spell that would force him to obey Dortmunder when Dortmunder says the nonsensical phrase “Afghanistan Banana Stand.” Dortmunder goes to the bank, says the magic phrase, and orders this bank employee to open Abe’s box. Dortmunder gets the jewel and leaves the bank just as Amusa and Abe are pulling up in a limousine. Dortmunder climbs into a car with his gang, and they drive off happily. 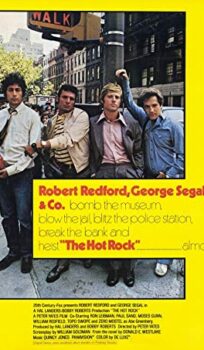