SHORT VERSION:
Unhappy with the growing rebellion, President Snow decides to put Katniss and Peeta back into the Hunger Games with fellow previous winners as a punishment to them and to shut down any rebellion against The Capitol. All the victors are unhappy about going back into the games and try to create an uprising in the Capitol to shut them down but it fails. In the arena, Katniss and Peeta team up with some of the other tributes and Katniss (and Snow) discovers that she has genuine feelings for Peeta, that it’s not just an ‘act’ anymore. After most of the other tributes are killed, Katniss and Peeta get separated and the alliance with Beetee, Finnick and Johanna breaks down. Before Katniss can kill Finnick, he tells her to ‘remember who the real enemy is’ i.e. Snow, and Katniss then destroys the Arena. Katniss, Beetee and Finnick are rescued from the arena, and she discovers that Haymitch and Heavensbee had been working together all along to save her. The rebels see her as a symbol of the rebellion, The Mockingjay. She also finds out Peeta and Johanna were kidnapped by the Capitol and she freaks out over losing him. Later, she awakens in District 13 (the hub of the rebellion) and Gale informs her that her family is safe but Snow bombed District 12 and it has been destroyed.

LONG VERSION:
Six months after the end of “The Hunger Games”, the Victory Tour is about to begin. Katniss (Lawrence) is dealing with PTSD from the games and Gale (Hemsworth) kisses her, letting her know he is jealous of her ‘romance’ with Peeta, and that he wants to be more than friends. She doesn’t give him an answer. Meanwhile, her relationship with Peeta (Hutcherson) has become cold and strained, even though he is truly in love with her.

President Snow (Sutherland) visits Katniss, he tells her that some districts and people didn’t buy the ‘school girl in love’ act and that her actions in the arena were taken as an act of defiance, leading people to try and rebel. He wants her to quell the rebellion, proving that her and Peeta are in love and it’s not an act. Katniss promises that she’ll convince them, and Snow threatens Gale and her family if she doesn’t comply.

Before the first stop on the Victory Tour, Peeta apologizes to Katniss for his cold behavior and since they have to keep up the act, he wants to become friends, Katniss agrees. In District 11 (Rue and Thresh’s home), Peeta starts the pre-written speech but then goes off script and gives a moving speech honoring Rue and Thresh’s sacrifice and gives 1 month of their winnings to Rue and Thresh’s family for the rest of his and Katniss’ lives. Which in turn, inspires Katniss to make a speech to their families. This causes an uprising with the crowd
and a protester gets executed.

Afterward Haymitch (Harrelson) reminds them this won’t stop, they’ll have to be paraded around for the cameras every year, they are now mentors like him, so their act will continue as well. The Tour goes badly, with people rioting and getting taken away by Peacekeepers, Katniss suggests that she and Peeta get engaged, publicly, as a way to make Snow happy. Peeta isn’t happy about the plan but he agrees.

At the Capitol party celebrating their engagement, Snow lets Katniss know that he is not convinced, and later starts to plan Katniss’ demise with new head gamemaker Heavensbee (Hoffman) .

Snow announces for the 75th anniversary of the Hunger Games, the Quarter Quell, the tributes will be reaped from the existing pool of Victors. Meaning Katniss and either Haymitch or Peeta are going back into the games. Katniss makes Haymitch promise to save Peeta, meanwhile Peeta requests that Haymitch save Katniss. At the reaping, Haymitch is reaped but Peeta immediately volunteers to take his place.

Before the games start, Haymitch advises them that they’ll need allies, Katniss doesn’t want allies and she doesn’t want to trust the other Victors, especially Finnick (Claflin) and Johanna (Malone). During the training, she does makes friends with Beetee (Wright), Wiress (Plumber), and Mags.

At the tributes interviews, all the victors are voicing their protests about going back into the games and to force the Capitol to shut down the Quarter Quell. Katniss is forced to wear her wedding dress but Cinna (Kravits) alters it so it turns into Mockingjay dress, angering Snow. Peeta deceives the audience, telling them that he and Katniss got married in secret and drops a bombshell that Katniss is pregnant. The revelation causes the Capitol citizens to be outraged and call for the games to be stopped. But Snow and Heavensbee press on with the Games.

Before the start of the Games, as Cinna and Katniss are saying goodbye, peacekeepers come in and viciously beat Cinna and drag him away. In the arena, Katniss can’t locate Peeta from her pedestal but she is able to swim to the cornucopia and get a bow. Finnick kills a tribute that was going after her and says that Haymitch wants them to be Allies. He and Mags locate Peeta, who is fighting with a tribute in the water, Peeta kills the man. Katniss, Peeta, Mags and Finnick team up and take off into the jungle to escape the bloodbath at the cornucopia.

As they are hiking, Peeta hits a forcefield. His heart stops and Finnick starts to perform CPR. Katniss freaks out and when Peeta is revived, she is shaken. Snow watches their exchange and now knows Katniss has genuine feelings for Peeta.

Later, the group is attacked by poisonous fog and monkey mutts, Mags dies in the Fog and the morphling tribute sacrifices herself to protect Peeta from an attacking mutt.

Finnick, Katniss and Peeta then meet up with Johanna, Beetee and Wiress. Through Wiress, they figure out that the arena is a clock, with threats coming every hour. Wiress is quickly killed by a Career tribute and Katniss in turn kills him.

Beetee comes up with a plan. Lightning strikes a tree at Midnight, so using his coil of wire they plan to electrocute the remaining Career tributes, leaving only the Allies left. They all agree to the plan but Katniss is unsure. Later, she and Peeta discuss breaking away from the alliance, She wants to leave them before the plan is in motion, he was to stay with the alliance because he believes it will work. Neither of them are comfortable killing their fellow alliance members. Peeta reveals to her that he knows she made plans with Haymitch to save him but that’s not what he wants. He wants her to win. He gives her a locket with her family and Gale’s picture in it, to remind her that she has people that need her, and tells her no one needs him. She tells him that she needs him and they passionately kiss.

They decide to go along with Beetee’s plan, and immediately find out Beetee, Johanna and Finnick want to separate them. Under the pretense of keeping up the alliance, Katniss and Peeta separate but both are uneasy about it. Things quickly go south, the Careers attack Johanna and Katniss and cut the wire they were taking to the beach, then Johanna attacks Katniss and cuts her arm. Katniss makes her way back to Beetee and the lightning tree, screaming for Peeta. She finds that Beetee has knocked himself out trying to put his wire in a force field. Finnick comes back and while Katniss is deciding to shoot him, he reminds her to “remember who the real enemy is” i.e. Snow. Katniss threads the wire onto one of her arrows and shoots it at the dome over the arena, destroying it.

She is picked up by a Hovercraft along with Beetee, and then discovers Haymitch, Finnick and Heavensbee are also on board. They had all been working for the rebels and the plan all along was to get her out of the arena so she could be the symbol of the rebellion. She asks where Peeta is and Haymitch tells her that he and Johanna were taken by the Capitol. She freaks out to the point that Heavensbee sedates her. Katniss wakes up in District 13, Gale is there to greet her. He tells her that Prim and her mom are safe and in District 13, but Snow bombed District 12 and it’s completely destroyed. 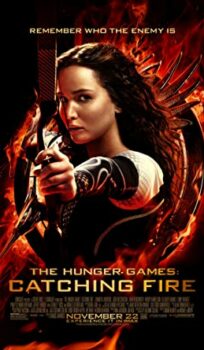