Submitted by Tom and Michael R

After being rescued from the Hunger Games dome she destroyed, Katniss (Jennifer Lawrence) is in District 13 now, an underground rebel hideout. Petaa (Josh Hutcherson) was rescued from the dome by President Snow’s (Donald Sutherland) forces and is still in the Capitol.

District 13’s President Coin (Julianne Moore) is planning to use Katniss “The Mockingjay” as a media icon to keep the revolution’s momentum going, while Snow uses Petaa to appeal to all the districts to stand down and prevent a civil war.

President Coin decides that Katniss needs to be shown the devastation. When Katniss goes to District 8 along with a camera crew led by Cressida (Natalie Dormer) the capital bombs the hospital where they went previously. In filming the aftermath Katniss comes to truly understand what is at stake.

After a bombing of the dam used to generate water energy for the Capitol and shutting down all common electricity, Beetee (Jeffrey Wright) manages to bypass the Capitol’s firewalls and finds out that the former Tributes are being held at the Tribute Center. A small taskforce flies in undetected and rescues the Tributes. Although Snow reveals to Katniss during a video conversation that he knew that the team was rescuing the tributes, they all return unharmed, including Petaa.

A brainwashed Peeta, tries to convince Katniss to put down arms. It is revealed that he was manipulated by Snow’s men through drugs, torture and instillation of fear to serve as a human weapon to kill Katniss.

The movie ends with an encouraging speech by Coin that the revolution will bring down the Capitol and free all the people. While Coin is giving her victory speech, Katniss sees Peeta, now a strait jacket and tied to bed in a padded room. 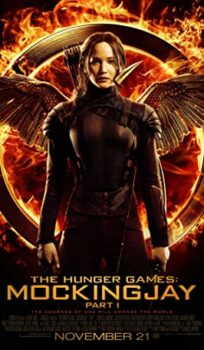