The salesman Hickey (Lee Marvin) tries to change his friends’ lives for the better by ripping apart the lies they tell themselves, and ridding them of their “pipe dreams.” At first, they are inspired by Hickey, but after a while, they find it too difficult and painful to follow his advice, and start to retreat back into their illusions.

Hickey’s friends turn on him, and he is forced to reveal a horrible, dark secret of his own. Hickey had been telling his friends that his wife died… but in reality, Hickey had murdered her himself. Hickey had long been a philanderer, a drunk, and a horrible husband, but his wife had always adored him, forgiven him, and expressed her hope that Hickey would change and become a good man. Hickey resented the guilt she laid upon him, and the resentment built into anger, until he killed her. As he killed her, he mocked her pipe dream that Hickey could ever be more than a drunken lecher.
The police arrive and arrest Hickey for murder. Hickey wants to die for his crime, but his friends promise to testify that he is not guilty by reason of insanity.
In the end, Hickey realizes that human beings simply can’t survive without comforting lies and illusions. After Hickey is taken away, most of his friends go back to drinking and dreaming. They tell themselves that Hickey was crazy, and that his earlier denunciations of them can be safely ignored. But young Don (Jeff Bridges) commits suicide, and Larry Slade (Robert Ryan) grimly accepts that Hickey was right: he’s been deluding himself all his life, none of his dreams will ever come true, and he is destined to die as a sad, lonely drunk. 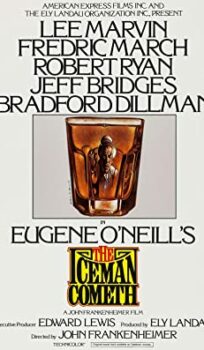