Upset about the fact that Paul (Philip Seymour Hoffman) purportedly leaked the story of his meeting with Duffy (Paul Giamatti) to have an excuse to fire him from Morris’s (George Clooney’s) campaign committee, Stephen tries to convince Duffy to hire him into Pullman’s (Michael Mantell’s) committee. However, after some beating around the bush, Duffy openly admits he never truly intended to hire Stephen: it was all about damaging Morris’s campaign. He also advises Stephen just to walk away from all that, or else he will eventually end up giving up his idealism in favor of the farce that is the game of politics.

Stephen tries to go back to Molly (Evan Rachel Wood), only to discover she committed suicide, distraught over the whole pregnancy/affair incident involving Morris, and her fear that Stephen would use it in retaliation to force himself back into Morris’s committee. This bolsters Stephen into action: he learns Thompson (Jeffrey Wright) will heavily endorse either of the two pre-candidates if he is assured the position of Secretary of State, and then lets know Morris he knows about the affair. Then, they meet in the kitchen of a restaurant and Stephen coerces Morris to fire Paul, reinstate him -now as Head Manager- and take Thompson’s endorsement, which will assure him the nomination. Morris is defiant and scoffs him about his actions just ending up being “the word of a disgruntled ex-employee against the one of a potential future President”, to which Stephen answers by letting him know “she left a note behind”. Even though Morris is almost sure that was not possible, Stephen still insists: “It’s your call”, which clearly indicates he is willing to get his way by any means necessary.

Of course, Paul is fired in favor of Stephen, but publicly states he and Morris “just decided to pass the baton to someone else, since the numbers had made him”. Later on, he and Stephen meet at Molly’s funeral, and they talk about the possibility of discussing the dirt Stephen had on Morris over a beer some time.

In the end, it is visibly clear how the game of politics got to Stephen and corrupted him: he blatantly avoids his reporter friend Ida (Marisa Tomei) when she pleads for help for a story, and is seen about to participate in a TV interview while meditating how he forcefully came to understand his former idol Morris was just like every other politician -sweet-talking and conning his way to power- and how he himself, indirectly caused an innocent person to take her own life for the sake of revenge. When the newscaster is heard asking Stephen how the past chain of events came to happen, Stephen just stares vacantly, with a cold expression. We are left to think that he will actually disclose what happened (a clear nod to the events of “The Ides of March” in Ancient History, when Brutus gave Caesar the fatal blow that brought him down). 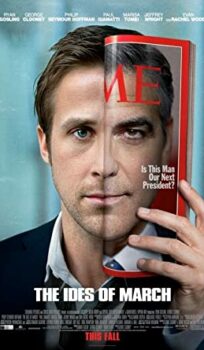