An anthology movie based on stories by Ray Bradbury that is scheduled for a remake.

During the depression, a vagrant meets the Illustrated Man (Rod Steiger) and they both camp out for the night. The Illustrated Man was tattooed by a woman (Claire Bloom) from the future. Look at the tattoos long enough and you see stories. Now he is trying to find the woman who made him an outcast so as to kill her. Three stories are presented.

The Veldt – Rod Steiger falls prey to his children’s creation of an African Veldt with lions in a “virtual reality playroom”.

The Long Rain – Rod Steiger and 3 others survive a crash on a hostile planet where it rains constantly. Only Steiger reaches the shelter of a “sun dome”.

After the three stories, the vagrant looks at a blank spot on the Illustrated Man and sees Steiger trying to kill him. The vagrant then decides to kill Steiger first. He fails and runs away. Steiger takes off after him, to apparently fulfill the prophecy. 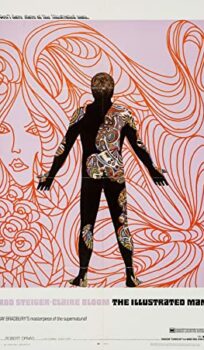