This is the true story of Maria (Naomi Watts) and her husband Henry (Ewan McGregor), along with their sons Lucas, Thomas and Simon, who are vacationing in Thailand when the tsunami strikes on December 26, 2004.

Maria and Lucas are both swept away by the huge waves, but manage to cling together.  Maria is seriously injured, suffering dangerously deep lacerations to her chest and leg.  She and Lucas make it to a large tree where they rest, and are eventually rescued by some locals who transport her and Lucas to a triage hospital.  While Lucas steps away for a bit to help others look for loved ones they were separated from, Maria is removed from her hospital bed for surgery and when Lucas comes back to find her missing, he is told that she has died and is placed with other orphans to wait.

Meanwhile, Henry, Thomas and Simon have survived the waves as well, and are still at their now-demolished hotel awaiting rescue. Henry goes out searching for Maria and Lucas often and when authorities come to move the hotel guests to higher and safer ground, Henry sends his two sons to safety but himself remains behind to continue searching.  He hitches a ride to various triage hospitals in hopes to find his missing wife and son.

The nurses at the triage center ask Lucas to identify personal belongings of his mother but when he doesn’t recognize anything, they realize that they had misidentified Maria and bring Lucas to see her. She is alive but infection has set in and she is clinging to life.  Lucas steps outside to get water for Maria and spots his father in the crowd. He rushes to find him but loses track of him in the heavy crowds. However, Thomas and Simon are also at the same hospital where they are being transported to safety in truck with other children.  Simon jumps out of the truck because he has to use the bathroom and Thomas follows. Thomas then sees Lucas in the crowd and the three brothers are reunited.  Then Henry sees his sons and runs to them.  The whole family goes to visit Maria who is being wheeled in for surgery on her leg and she is at peace knowing she was able to see her entire her family, maybe for the last time.

Maria does survive her surgery, and their insurance company sends a representative and a private plane to transport them back home to Japan. As the plane leaves Thailand, the entire family each privately reflects on their ordeal. 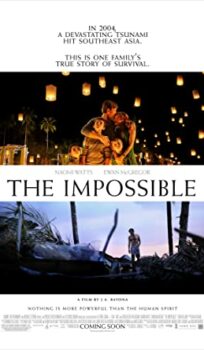