Burt Wonderstone (Steve Carell), Anton (Steve Buscemi) and Jane (Olivia Wilde) win the spot at the new casino (The Doug) with a five year contract by using an herb, reduced to a gaseous form, that knocks out the crowd, moving the crowd to middle of the desert, knocking them out again and moving them back to the casino. They call it “The Disappearing Crowd Trick.”

The duo make Jane a permanent part of their show.

Steve Gray (Jim Carrey) proves he basically has no magical talent. He just inflicts pain on himself to amuse others. During his final trick, he drills a hole in his head, causing brain damage. 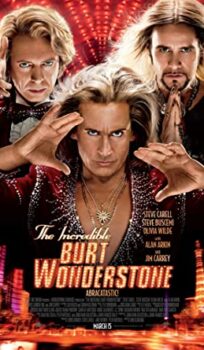