Pooper:
All the relationships end poorly, with only Jack acting selflessly to save the kidnapped boy and ruining his life as a consequence.

Long Ending:
Based on a collection of short stories written by Bret Easton Ellis (American Psycho, Rules of Attraction), this film follows the lives of various people living in Los Angeles in 1983.

The movie begins by following Graham Sloan (Jon Foster), a wealthy kid at a big mansion party. He is bisexual and in a relationship with nymphomaniac Christie (Amber Heard) and Martin (Austin Nichols). At the party, one of their classmates is accidentally hit and killed by a drunk driver, dying in Graham’s arms. Thanks to emotionally distant parents and a drug-filled lifestyle, Graham himself is emotionally detached and troubled by his lack of feelings about his classmate’s death and his inability to tell right from wrong. He is in love with Christie, but unable to express his true feelings to her or ask her to stop seeing Martin and the other people she sleeps with. Eventually, Christie contracts AIDS and Graham is called by her guardian to comfort her. Graham kisses her, and when she is largely unresponsive, he leaves.

Graham’s parents are his pill-popping, emotionally fragile mother Laura (Kim Basinger) and his unfaithful, emotionally aloof father William (Billy Bob Thornton). His parents are separated (causing Graham’s sister to have to care for their on-edge mother) because William had an affair with news anchor Cheryl Moore (Winona Ryder). William is trying to repair his relationship with Laura (possibly so he won’t lose everything in a divorce), but also won’t let Cheryl go. Eventually, Laura discovers that William is still into Cheryl and when she confronts him, he admits he may never have loved Laura. They are scheduled to go to a party that Cheryl is attending and Laura wants to go and confront her and keep up appearances as a family. Once they arrive, however, Laura is too emotionally weak to attend and ends up driving away, abandoning an embarrassed William alone at the party.

Another one of Graham’s classmates is a kid named Tim (Lou Taylor Pucci) goes on a trip to Hawaii with his somewhat-estranged father Les Price (Chris Isaak). Les clearly wants to connect with his son, but embarrassingly flirts with women in front of Tim, accuses Tim of being gay, and is borderline alcoholic. Tim invites a girl he meets to dinner and Les both flirts with and embarrasses Tim in front of her. Tim storms off and when Les follows, Tim explains that he just came to Hawaii for the free vacation and that they will never have a real relationship.

The doorman at Graham’s hotel is a guy named Jack (Brad Renfro). Though Jack is trying hard to be an actor, he is both neurotic and unattractive. Jack’s background is one of poverty and possibly criminal activity, but he now has his own place and a steady job. One day, his Uncle Peter (Mickey Rourke) shows up at his house with a 15-year old female companion and a young boy who he is holding for ransom. Jack tries to get Peter to leave, but Peter insists on staying, saying that Jack can never escape his upbringing. Eventually, a mysterious group of men “buys” the boy, but Jack (who is home alone when the purchaser’s representative arrives) refuses to give the boy to the group. The group threatens to return and after Jack tells Peter what has happened, Peter says they need to kill the boy (saying it would be a better alternative than the life he faces with the group) and leave town. Jack volunteers to kill the boy, but instead frees the child and fakes the murder scene. Jack jumps in the car with Mickey and his companion while the boy runs to freedom. They leave LA, with Jack knowing that his sacrifice for the boy has led to the ruination of the life he has built in LA.

Finally, Graham and his sister love a band called “The Informers.” The band’s lead singer Bryan Metro (Mel Raido) is constantly using drugs and alcohol. They are in LA for a concert, but Bryan is acting increasingly erratic. We eventually discover that the band’s bassist has committed a violent and very public suicide, that Bryan has no friends or even anybody to tell him “no,” and that his wife has left him and has cut him off completely from his child who fears him. Bryan’s problems get so bad that he even walks off-stage in a stupor mid-show. Bryan returns to his hotel room where a groupie awaits him. The two begin to have sex, but then Bryan begins to strangle and beat her. It is never revealed whether he kills her, but he is last seen smiling with his band. 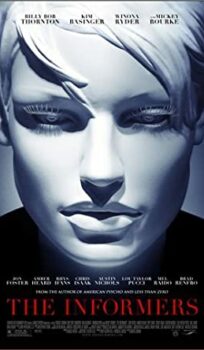