An alien-lifeform, much like a fungus or a spore, clings to a space shuttle, Patriot, as it crash-lands back to Earth, spreading the tainted debris from Texas to Washington DC. Curious onlookers steal, touch, and even sell the parts on Ebay, much like what happened with the Columbia tragedy. This in turn infects many people, which robs them of their emotions (much like the “pod people” from the other remakes) when they enter REM (deep) sleep.

One of the first people infected is Tucker (Jeremy Northam), a White House official investigating the crash. Once he is taken over by the spore, he spreads the disease further and takes over the CDC, disguising the spore as injections for a flu innoculation, which becomes almost mandatory across the United States. In a panic from the made-up “flu bug” people rush to get “innoculated”, becoming pod people in the process when they sleep that night.

Meanwhile, Tucker’s ex-wife, psychiatrist Carol Bennell (Nicole Kidman), knows something isn’t right, and, after getting several patients that say their loved ones are “impostors”, teams up with love interest and fellow doctor Ben Driscoll (Daniel Craig) to get to the bottom of what is really going on.

With the help of Driscoll’s friend Galeano (Jeffrey Wright), a biologist, they find out about the spore, and discover that it takes over the brain during REM sleep. They also find out that certain people who have had diseases that affect the makeup of the brain, such as syphilis, scarlet fever, etc., are immune to the spore, because their previous diseases fight the spore and keep it from “latching on” to the brain matter. Oliver, Carol’s son, is immune to the spore because of scarlet fever-type symptoms he had as a young child.

After evading the “pod people”, hiding her emotions, and staying awake with great difficulty throughout the movie, Carol manages to get Oliver away from Tucker and the other infected, and to Galeano, who uses Oliver’s blood to create a vaccine/cure which is delivered airborne through firefighting helicopters. Because the spore latches on to the brain during REM sleep, no one remembers a thing when they are cured – it’s just as if they have woken up from a dreamless nap.

Driscoll gets taken over by the pod people at one point, but gets cured at the end of the movie. He was shot by Carol when he was infected, but makes it OK. Both Ben and Carol are actually sympathetic towards the pod people and what they had to offer through a perfect world at the end of the movie, when they read the paper and see “business as usual” (other tragedies, war, violent news, etc..) 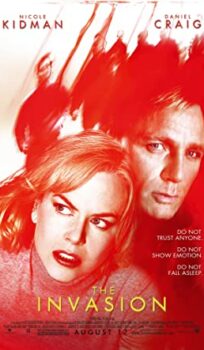