In this alternate version of the world no Human being is capable of any level of deception or lying, until one day Mark Bellison (Ricky Gervais) asks to withdraw all of his money from the bank and is asked how much that is. Some odd connection in his brain lets him say $800 instead of $300.

Having invented lying, Bellison begins to exploit his newfound power. He is a screenwriter by profession, but in this world there is no fiction and no acting; writers write detailed descriptions of historical events which are then filmed being read out by famous readers. Bellison’s new script includes a 13th century invasion of Earth by Mars, robot dinosaurs and a Ninja army!

At his mother’s side as she dies, Bellison tells her that people do not enter nothingness but go to a fantastic place where they live in a mansion and have everything they ever wanted; unfortunately the hospital staff overhear this, and the news that heaven exists spreads across the world. Mark finds himself having to invent God, whom he calls “The Man in the Sky”, complete with various commandments and rules about who goes to heaven.

Throughout all this he is trying to woo Anna (Jennifer Garner), a girl who considers herself out of his league and will not become romantically involved with him because his genes would give them “fat babies”. Mark considers telling her that the Man in the Sky wants them to be together but holds off, wanting real love between them. At the last moment Anna realises that she does love him, and the two marry. Mark confesses to her that he is capable of lying, and she accepts this though she cannot understand how he can do it.

At the end of the film it is revealed that their son has also inherited his dad’s capacity for lying. 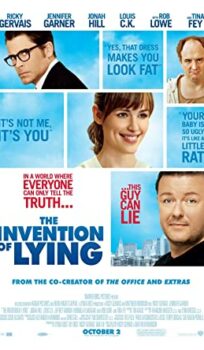