The invisible man died at the end of the first movie. In this movie, his brother Frank Griffin, has kept the invisibility formula.

Geoffrey Radcliffe (Vincent Price) has been falsely imprisoned for murder of his brother.  His friend Frank Griffin gives him the invisibility potion, so he can escape and find the real killer.

Radcliffe learns that his cousin, Richard Cobb, is the real murderer. The police chase them. Cobb falls to his death, but lives long enough to confess to the murder.

Radcliffe was shot by the police. It appears that he will die, because the doctors can not see him to operate on him.  They give him a transfusion, to make his blood vessels visible, so they can operate. The transfusion reverses the potion, and he becomes visible again. 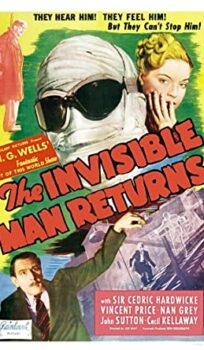