FBI Deputy Director Carter Preston (Sidney Poitier) recruits convicted IRA terrorist Joseph Mulqueen (Richard Gere) out of prison to help capture the mysterious “Jackal” (Bruce Willis), who is plotting to assassinate the director of the FBI (John Cunningham). Mulqueen agrees, on the condition that he is allowed to visit his former lover Isabella (Mathilda May). As the investigation closes in, the Jackal also begins to kill off the law enforcement team chasing him. The Jackal insults Mulqueen’s ability to “protect his women” as he mutilates Major Valentina Koslova (Diane Venora). She lives just long enough to pass along the insult, which makes Mulqueen realize that the Jackal’s target is not the FBI director, but is actually the First Lady (Tess Harper). Mulqueen foils the assassination attempt, and chases the Jackal into the subway. Just when it appears that the Jackal has the upper hand, he is shot by (a deus ex machina) Isabella; Mulqueen finishes him off. Preston, assigned to escort Mulqueen back to prison, asks Mulqueen to wait for him while he steps out for 30 minutes to “get a cup of coffee,” allowing him to escape. 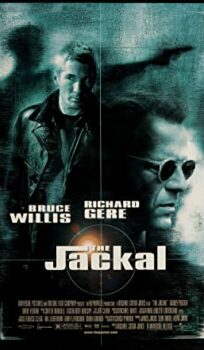