Navin Johnson (Steve Martin) makes millions of dollars inventing an eyeglasses handle called ‘Opti-Grab.’ Unfortunately, the Opti-Grab acts like a magnet to the vision, causing the wearer to become crosseyed. Movie director Carl Reiner and millions of other Opti-Grab buyers join in a class-action lawsuit that leaves Navin penniless. He walks out on Marie (Bernadette Peters) after hand-writing most of the settlement checks. His family finds him living homeless on the streets of Los Angeles with only a Thermos bottle to his name. It turns out that with the small amount of money that Navin sent home, his father (Richard Ward) invested wisely in no-load mutual funds, and the family is now well off. Navin and Marie are invited to move back with the Johnson family in Mississippi, where they all live happily ever after (in a new, larger shack in the woods). 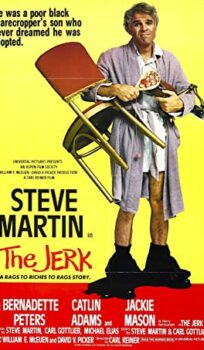