During the Depression, widower Sol Gann (Ray Wise) is looking for work in Chicago while his 12-year-old tomboy daughter Natty (short for Natalie) fends for herself during the day. He gets an offer of work in Washington state and has to leave immediately, before he can tell her goodbye. He leaves a letter explaining that he will send for her soon & puts her in care of their landlord (Lainie Kazan).

The landlord isn’t the maternal type and soon Natty (Meredith Salenger) runs away to ride the rails trying to get to Seattle. Her wallet is found in a train wreck (which she survived) so word reaches her father that Natty is dead. Sol, devastated, then volunteers for the more dangerous jobs at the lumber camp.

Natty crosses paths with kind young hobo Harry (John Cusack) and befriends a wolf that she helps escape from a dog-fight. Natty falls in with a group of thieves, is caught stealing livestock, is sent to an orphanage, escapes, finds the wolf again, is defended against a molester by the wolf, encounters Harry again, and the three continue on westward.

They arrive in Washington. Harry gets an offer of work in California and he reluctantly leaves without Natty, who insists on continuing her search for her father. They share a brief kiss before he gets on the bus.

The wolf is being called with howls by a pack in the woods, so Natty tells him it’s okay to go to them since that is where he belongs. She’s now all alone.

Natty finally gets word that her father is at a certain lumber camp and she hitches a ride to get there, only to have to run the last few miles after the car is in an accident. Her father has been injured on the job (she hears the explosion) and she sees him in a truck heading back down the mountain she just came up… her father sees her too and gets out of the truck and they are tearfully reunited on the logging camp road.

The wolf sees the reunion from a cliff overlook. 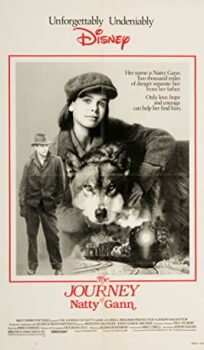