Pooper:
Mowgli steals a torch from the man village and lures Shere Khan to the dead tree where Mowgli has set up a vine that he jumps to when Shere Khan pounces at him on a high branch. The branch breaks and Shere Khan falls to his death.

Longer:
Mowgli was adopted by the wolves after being found by Bagheera. His father was killed by Shere Khan after burning the tiger’s face. Shere Khan discovers that Mowgli is living among the jungle inhabitants during a water truce and swears he will kill the boy when the truce ends.

Mowgli volunteers to leave the wolf pack because he knows he is putting them in danger by being there. Soon after he leaves, Shere Khan takes over the pack by killing their alpha Akela.

In their travels to the man village, Bagheera loses Mowgli when Shere Khan ambushes them in a field and causes a stampede of water buffalo. Mowgli narrowly escapes and finds his way to a tree where he meets Kaa. Kaa manages to hypnotize Mowgli into letting her coil him up in preparation to eat him, but he is saved by Baloo the bear. Baloo obliges Mowgli to help him get honey from the bees. Bagheera discovers this and informs Baloo that Shere Khan has killed Akela and is coming for Mowgli. Baloo attempts to get Mowgli to leave for the man village, but he ends up being taken by the Bandar-log to their leader King Louie. Louie tells Mowgli to bring him man’s “red flower” (fire), but Baloo and Bagheera intrude and Mowgli manages to get away, but not before Louie tells him that Shere Khan has killed Akela (who was basically Mowgli’s surrogate father as he was the wolf pack leader). Furious at Bagheera and Baloo for keeping it from him, Mowgli ventures to the man village and steals a torch from its gate. As he runs back to confront Shere Khan, embers start a forest fire.

The animals gather in a field where Shere Khan tells Mowgli that they now fear him for using man’s fire as he had always warned them he would. Mowgli throws away the torch, as Shere Khan wanted him to, but the animals protect Mowgli from Shere Khan long enough for Mowgli to set a trap for Shere Khan at a hollowed out dead tree. Mowgli runs out onto a high branch where Shere Khan leaps at him, but Mowgli jumps onto a nearby vine he had set up to catch himself. The branch breaks under Shere Khan’s weight, though he tries to jump back to the tree, he falls to his death in the fire below. The elephants whose calf Mowgli had helped save earlier divert the river to put out the fire, and Mowgli continues to live in the jungle as a man-cub among the wolves. 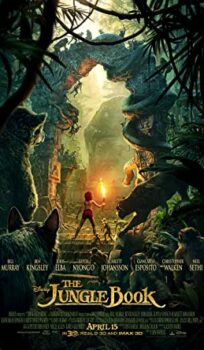