Short Version:
The kids see a UFO and are pursued by Men in Black (not the good kind).

Skylar and Corey are abducted by bright lights, Tren is shot dead by the MIBs, and Dakota is carried off by them.

Apparently their parents were in on it and have a history with some sort of conspiracy. But it’s never explained. You never see an alien, or a UFO up close and personal. Nothing but MIBs, bright lights, and a shadowy figure that might be an alien.

Long Version:
The film is presented by a masked man from the “Kaos” organisation who claims to be revealing the truth about some form of conspiracy. The footage to follow is claimed to be part of the Edward Snowden leak.

Four teenagers – twins Skylar (Drew Lipson) and Dakota (Charlie Morgan Patton) head off for a weekend of camping in the woods with Sylar’s boyfriend Corey (Marco DelVecchio) and Dakota’s boyfriend Tren (Akanimo Eyo). Skylar is an avid blogger and is recording the trip with handheld cameras and a drone.

The first night they see strange lights in the sky, an apparent UFO. The following morning they find strange piles of balanced rocks outside their tents. A drone flight shows a pattern of spots burned into the ground in an adjacent field. On returning home, Skylar is warned by an anonymous series of messages on his computer that he has drawn attention – “they” are watching him and “they” do not want things like the lights discussed. The anonymous messenger reveals that he or she knows intimate details of Sylar’s life, though denies spying on him.

Further strange things happen; strange “men in black” come to the house and demand to talk to the kids about their experience, urging them not to talk about it. Their black car returns to sit outside the house in the middle of the night, follows them around during the day, etc. The kids begin to find strange marks on their bodies, and at least one proves to have an implant of some kind under his skin. Strange lights appear in and around the house, Dakota has some kind of strange seizure, apparently seized by an unseen force which leaves her covered in bruises.

The kids also find a secret room in their basement, apparently built by their parents, with electrical equipment inside. A VHS tape in there shows them as small children being taken to some sort of facility and apparently handed over to a tall, thin figure seen only in silhouette. Dakota has vague memories of some kind of family secret that is never spoken of, but they cannot contact their parents to talk to them about this as they are on vacation.

Finally, Corey is abducted from his room by a bright light as Skylar watches helpless via a computer video chat. The Men in Black return, and shoot Tren dead as he challenges them. Skylar is apparently abducted too, whilst Dakota is physically carried away by a Man in Black.

During the end credits, the Men in Black arrive at a building which proves to be the location of the masked Kaos man, apparently there to shut him down. 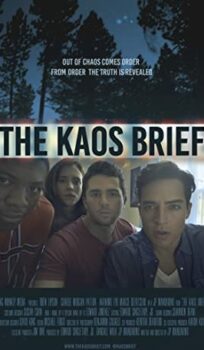