Photojournalist Dith Pran (Dr. Haing S. Ngor) is forced to live, like just about every other Cambodian, under the four years of the oppressive and totalitarian Communist Dictatorship of the Khmer Rouge; a regime under which the way of life was reverted and reduced to agrarian slave labour, with heavy indoctrination of the younger generations, absolute disregard for dignity and humanity, a generalized state of collective distrust and paranoia and where anyone perceived as an “undesirable” (intellectuals, minorities, opposers, religious people) was killed. He faces torture, abuse, starvation and witnesses, first-hand, not only the decimation of the population, but also the infamous “Killing Fields”, filled with thousands of rotting corpses all throughout the countryside.

Eventually, he is placed as a servant for a high-ranking official -particularly taking care of his son- and earns his trust because of how close the boy grows to him. When a Vietnamese invasion brews in the air and his boss is shot dead over a scuffle concerning some villagers he didn’t want killed, Pran and a few others make an escape to the jungle, using a map and some money that the kid had under his clothes. At some point, the group splits in different directions; sadly, another man tagging along with Pran and carrying the boy accidentally steps on a landmine, which kills them both. Pran continues alone until reaching a Red Cross camp in Thailand.

Meanwhile, back in New York, Sydney (Sam Waterston) has spent every possible resource trying to figure out what has been of his friend Pran. He begrudgingly accepts an award, which he dedicates to Pran and then has a bitter confrontation with Al Rockoff (John Malkovich) over how much effort he had actually put in finding Pran. Sydney eventually comes to the conviction that he might’ve actually wanted Pran to stay behind in Cambodia, in favour of his own work.

Then, news of the whereabouts of Pran reach Sydney and he and Pran joyfully reunite in Thailand. Title cards indicate that -at the point of the film’s release, in 1984- Pran returned with Sydney to America, reunited with his own family and went on to become a photojournalist for the New York Times; and also that the struggle in Cambodia hadn’t ended, since Pol Pot and the Khmer Rouge continued to try and wield power from some remote areas (both facts, however, stand as anachronistic nowadays, since Dith Pran died of cancer in 2006, Pol Pot died in his sleep in 1998, the Khmer Rouge was all but disbanded as a political force in 1999 and Cambodia, while at peace, is still recovering from that dark chapter of its history). 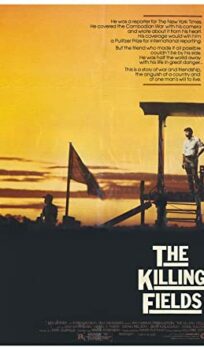