Rupert Pupkin’s (Robert De Niro) sole aspiration is to be the guest comedian on Jerry Langford’s (Jerry Lewis) show. Despite everyone quashing his dreams, including Jerry himself, Rupert still insists on making it in the big time.

Eventually, Rupert and Masha (Sandra Bernhard) make an ill-conceived kidnapping attempt on Jerry Langford and hold him hostage at his home. After making a deal with Jerry to appear on his show, Rupert is arrested and put in jail. After being released, Rupert’s celebrity surrounding the whole Langford kidnapping scheme propels him into the spotlight. Eventually, we learn that Rupert made a lot of money with his autobiography, and Rupert even secures his own talk show. The film ends as he takes center stage like he always dreamt. 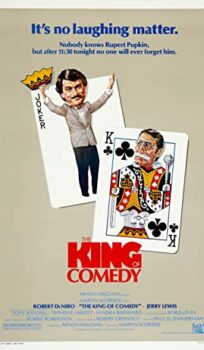