Scott Carlin (Pete Davidson) has resigned himself to being a pot-smoking slacker after the death of his firefighter father Stan. He wants to be a tattoo artist and goofs off with his friends, while giving a hard time to his mom Margie (Marisa Tomei) and sister Claire (Maude Apatow). After Claire goes to college and Margie starts dating another firefighter named Ray (Bill Burr), Scott is forced to make changes.

Scott doesn’t get along with Ray at first, but Margie makes Scott help walk Ray’s kids to school, and he ends up bonding with them. He tries to get dirt on Ray from his ex-wife Gina, which leads to them fighting and causes Margie to kick both of them out. After none of his friends will take him in, Scott swallows his pride and apologizes to Ray, and he spends time at the fire house with Ray and his buddies. Scott bonds with them, and he and Ray get to know each other better and see how much good the other one does. Margie sees that they have gotten better, and she lets Scott go back home while resuming her relationship with Ray.

Scott also decides to pursue a real relationship with his friend Kelsey (Bel Powley) after spending most of the movie just hooking up with her. 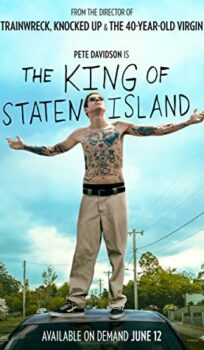