One of the worst B movies of all time- the monsters are men in poorly fitted rubber dinosaur suits.
It is hard to believe this was released in theaters.

A scientific expedition is sent down to Antarctica to investigate a mysterious warm area.  A helicopter with 3 military men and a female reporter, Maggie, loses control.  They fall down a deep crevice into a deep valley.  It is warm due to a volcano.  There are dinosaurs and prehistoric plants. They are surprised to find human footprints.

Maggie is kidnapped by Hunter, the only survivor from a plane that crashed in the valley years before.  Hunter has gone insane in the valley alone with the dinosaurs, and thinks he is king of the dinosaurs.  With the tools in his plane they could fix the helicopter and leave.  Hunter will only reveal the location of the plane and tools, if they leave Maggie with him.  The men refuse.  Their base ship will leave soon.   Maggie volunteers to stay until they can come back to rescue her.

Maggie is kind to Hunter, and spending time with her restores his humanity.  He brings her back to the helicopter.  Maggie and Hunter return with the others.  Maggie marries Alan (leader of the expedition). 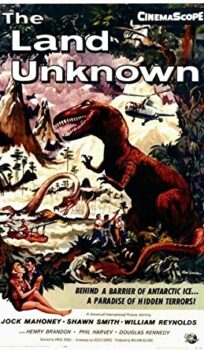