Jacques Le Gris (Adam Driver) did rape Marguerite de Carrouges (Jodie Comer), the wife of his best friend Jean de Carrouges (Matt Damon). However, Jacques claims the sex was consensual, so he denies he raped her. Count Pierre d’Alencon (Ben Affleck), who oversees the area for his cousin King Charles VI, presides over the case against Jacques and rules in his favor. Jean, knowing that Pierre protects Jacques, heads to Paris and files an appeal with the king. After hearing from both men, King Charles VI grants the appeal, and Jean immediately demands a trial by combat, which Jacques accepts.

Under the rules of trial by combat, whoever is victorious in the duel is deemed to be the one telling the truth. But if Jean loses, then it’ll be ruled that Marguerite made up the rape charge against Jacques, and the penalty for making a false claim is death. She is angry to learn this since Jean didn’t mention that to her before he demanded the duel. As a result of the rape, Marguerite is now pregnant, but the doctors of that era (late 14th century) claim that a woman cannot become pregnant from a rape, which would mean Marguerite is lying. Because of the pregnancy, the duel is postponed until after the baby is born.

A few days after Marguerite gives birth to a boy, the duel happens. Jean and Jacques first joust on horseback, then fight hand-to-hand. After several minutes of fighting, Jean has the upper hand. He demands Jacques confess or he will face eternal damnation, but Jacques still insists he’s innocent. Jean then stabs Jacques through the mouth, killing him instantly. Despite being injured in the duel, Jean celebrates his victory. However, Marguerite is quiet because even though her husband won the trial, everyone will think she made up the rape charge and got away with it. Title cards at the end reveal that Jean was killed a few years later while fighting in the Crusades. Marguerite lived the rest of her life running the de Carrouges estate and raising her son, but she never remarried. 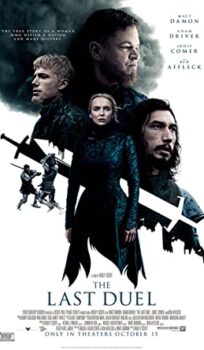