Short pooper:
“1900” (Tim Roth) never leaves the ship he had lived his entire life on board of and, feeling forever tied to it, decides to go down with it when it is decommissioned, scuttled and blown up offshore. Max (Pruitt Taylor Vince), although despondent of not having been able to save his life, recovers the old trumpet he tried to sell earlier, while the store owner (Peter Vaughan), in turn, obtains the record of the coveted original musical piece by 1900, which Max had hidden within the piano recovered from the ship.

Longer version:
The story is mostly told via flashbacks. 1900 (Tim Roth) -whose full given name was “Danny Boodman T.D. Lemon 1900”, in honor to the man who found him, an advertisement and the year in which this happened- was abandoned as a newborn aboard the luxury cruise liner S.S. Virginian and raised by Danny Boodman (Bill Nunn), a boiler room worker who would later be killed in a working accident; he avoided being hauled off to an orphanage by hiding from the authorities and, from then on, lived the rest of his life aboard the ship, without ever disembarking, no matter how many ports the ship arrived at.

From a very young age, he developed an unexplainable natural talent to play the piano and eventually went on to become the pianist of the ship’s band. At that point, he met and became friends with fellow musician Max, a trumpetist. Despite many motivations and invitations to walk off the ship, see the world and show his uncanny talent, 1900 always refused, alluding that “the world was too big for him”. Nonetheless, he was still able to interact with an assortment of characters from many different places and walks of life, including Ragtime legend Jerry Roll Morton (Clarence Williams III) -with whom he engages in a musical duel- and a Girl (Mélanie Thierry) whom he becomes smitten with. These encounters somehow allow him to experience a taste of the world he otherwise would have never had the chance to, committed as he felt to the ship; moreover, it helped influence his musical style and keep it in tune with times, as years passed.

One day, a record producer boards the ship, becomes acquainted with 1900 and his prowess and, with the help of a recording device, obtains a demo of one of his original pieces -which 1900 came up with, wanting to dedicate it to The Girl-, with the intention of commercially reproducing and selling it. 1900 refuses and, instead, tries to give it to The Girl, unsuccessfully; when this is not possible, he just smashes the record, opposed to anyone in the outside world knowing about him.

In the 1940s, a few years after Max left the ship band -and where the movie started-, having fallen on hard times, tries to sell his trumpet, but, before parting ways with it, is given the chance to play it one last time and plays a tune that the store owner recognizes as “the same one from a record he found inside a used piano recovered from a ship” (THE PIANO 1900 PLAYED ABOARD THE SHIP). When he asked Max about the tune, Max, in turn, told the story of 1900. At this point, Max, realizing 1900 might still be on the ship, manages to board it one last time with the recording in hand, which he plays to call his friend’s attention.

The ship is now totally derelict, and, because it had already run its course as an ocean liner, a hospital vessel and a cargo ship, is scheduled to be destroyed and sunk far off the coast. Max finally finds 1900 in the ruinous bowels of the ship, pretending to be playing a piano he no longer has and wearing his now-raggedy-looking suit. They have an emotional conversation where Max makes one last-ditch attempt to lure him outside; but 1900, feeling eternally attached to the ship, thanks him for always being such a good friend and tells him he feels at peace about going down with the ship, rather than dealing with the wide outside world.

Feeling he failed at saving a dear friend, Max has no other choice but to walk away. Shortly after, the ship explodes and sinks, killing 1900. Back at the store, the owner wonders how the record had made it into the piano, to which Max answers that he put it in there, having rescued the pieces after 1900 broke it. Impressed, he gives Max the trumpet back, alluding that “a good story was better than an old trumpet”, upon which Max leaves. 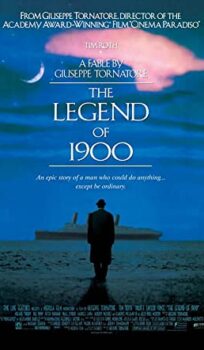