Emile Zola makes his name as a muckraking author in mid 19th century France. He has a string of successful books.

Meanwhile, intercepted letters reveal there is a spy in the leadership of the French army. The Generals ascertain that the traitor must be Captain Alfred Dreyfus, for no other reason than the fact that he is Jewish. He is summarily found guilty, stripped of all honors and rank, and sent to exile without his family on Devil’s Island off the African coast.

Over the years, evidence begins to emerge that Dreyfus was innocent. Emile Zola writes his famous “J’Accuse!” article and is called before the court and charged with libel. He is found guilty and flees to England.

Years pass and the real traitor, Major Esterhazy confesses his crimes, thus exonerating Zola and Dreyfus. One of the generals involved in the initial framing of Dreyfus commits suicide.

Dreyfus returns to France, much older, and is knighted. Zola dies the night before, pen in hand.

Wikipedia has great entries on both the Dreyfus Affair and Emile Zola. 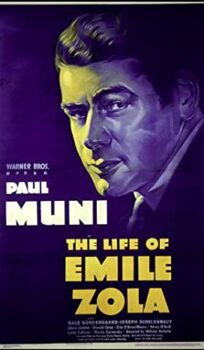