The Viking Rolfe (Richard Widmark) steals King Harold’s funeral ship in a quest for the mother of voices (a huge golden bell). The Moor Prince Aly Mansuh (Sidney Poitier coifed with a James Brown hairdo) captures the crew after they are shipwrecked and “convinces” them to retrieve the the golden bell. They find the bell and return to Poitiers land only to discover that King Harold has arrived. A fierce battle ensues and Sidney Poitier is crushed by the bell. The Vikings win and Richard Widmark is forgiven for stealing the ship.

Rolfe is last seen pitching a new expedition for treasure to King Harold. 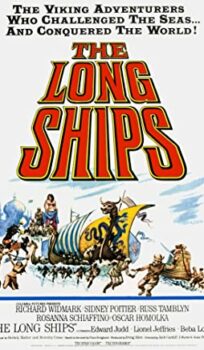