The Man Who Knew Too Much

The “A. Hall” mentioned in Louis’ (Pierre Fresnay’s) note is not a person, but rather The Royal Albert Hall, the place where the assassination is planned to occur. Bob (Leslie Banks) figures it out, and contacts his wife Jill (Edna Best) to inform her. She shows up at the choral performance at the Hall, and lets loose with a a well-timed scream that throws off the would-be assassin Ramon’s (Frank Vesper’s) aim. Ramon flees back to the gang’s hiding place, where a shoot-out with police ensues. Bob tries to escape with daughter Betty (Nova Pilbeam), but he is shot by Ramon. As Betty flees across the rooftops with Ramon in pursuit, Jill borrows a police rifle and plugs Ramon (who, ironically, was the opponent who defeated her in the skeet shoot in the opening scene!) Back at the shoot-out, the rest of the gang, including Abbot (Peter Lorre), is killed, and Bob is found to be only wounded. 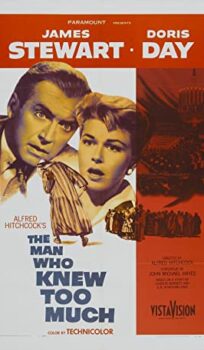