Mrs. Iselin (Angela Lansbury) is the Chinese mole. She has duped her husband, Senator Johnny Iselin (James Gregory) into thinking that he is on a crusade against communism, when he is actually just her puppet. She knows that her handlers will be sending an assassin to the party’s Convention to kill Presidential nominee Benjamin Arthur (Robert Riordan), thus permitting Vice-Presidential candidate Johnny to ride a wave of national fury straight to the White House. Those crafty communists expect to keep her in line because the assassin is her son Raymond Shaw (Laurence Harvey), kidnapped and brainwashed along with the rest of Bennett Marco’s (Frank Sinatra’s) squad in Korea. Marco “breaks” Raymond’s brainwashing, but Raymond takes off with a secret agenda. He still sneaks into the convention with a sniper rifle, but instead of shooting Arthur, he kills his mother and stepfather. Marco catches up with Raymond, but is too late; Raymond turns his rifle around and shoots himself in the head. 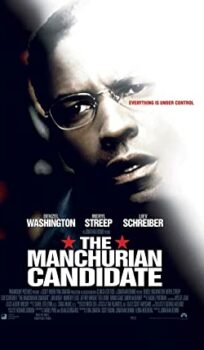