In a small Maine town, Bill Gartley (Robert Englund) runs his Blue Ribbon Laundry company with an iron fist. His business is the lifeblood of the small town, which gives him considerable power. When his niece, Sherry (Vanessa Pike) has her hand cut accidentally, the blood flows inside a large, dangerous laundry presser called a Mangler. This causes a chain of events that lead to several deaths, directly or indirectly caused by the machine.

Officer John Hunton (Ted Levine) and his brother in law Mark Jackson (Daniel Matmor) discover that the machine is possessed by a demon that craves sacrifice. Gartley, along with a local judge and Sheriff among others all made a horrific deal with the entity; the sacrifice of their virginal teenage daughters in return for getting to live and receive great power.

John, who realizes Sherry is turning 16 and about to be sacrificed by her uncle, races to stop him.  He and Mark stop Gartley just as he is about to feed Sherry to the Mangler. Mark kills Gartley’s protege Lin Sue by feeding her to the machine, and John forces Gartley onto the laundry press which smashes him to bits. The three attempt to exorcise the machine but fail, and it chases them as a sentient being. Mark is killed and Sherry and John barely escape with their lives as the machine implodes, apparently stopping it for good.

John goes to check on Sherry later only to realize that due to her losing a finger to the machine, it now holds power over her. She has had the machine rebuilt and her personality has warped considerably; no longer a scared, sheltered young girl, she has become a cruel, tyrannical business owner like her Uncle before her. John looks at her with sadness and resignation and drives away from the factory, most likely to leave the town for good. 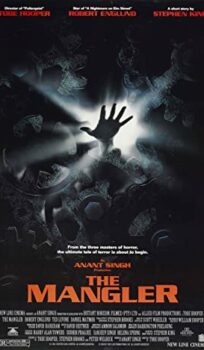