Peggy (Amy Yasbeck) saves Stanley Ipkiss/The Mask (Jim Carrey) from a cavalry of police officers one night, but later on turns him over to Dorian (Peter Greene) at her newspaper’s warehouse so she could collect the $50,000 reward Dorian had out for the Mask. Dorian takes the mask for himself, and his goons put a cheap green rubber mask on Stanley and literally dump him into Lieutenant Kellaway’s (Peter Riegert) lap at the police station, where he is soon thrown in jail.

Tina (Cameron Diaz) pays him a visit the next day, where she warns him that Dorian was going to do something terrible at the Coco Bongo Club’s Charity Ball that night, and Stanley tells her she’d better leave town. She attempts to do so, but Dorian and his goons chase her and catch her. Stanley, seeing the chase in an alleyway, manages to break out of prison with his dog Milo’s help, and with a gun he takes from a guard forces Kellaway to take him to the Coco Bongo. Meanwhile, the masked Dorian and his goons stampede into the club, kill their boss Niko (Orestes Matacena) and his men, and then tie Tina up to a palm tree on the club’s pond and turn on a bomb next to her that would level the place. Stanley arrives at the club, and though he gets his friend Charlie (Richard Jeni) to get the club patrons out of harm’s way, he is soon caught and disarmed and brought before Dorian.

Before he can be harmed, Tina saves him by convincing Dorian to remove the mask so they can have one last kiss together, and when they kiss, she frees her leg and kicks the mask out of his hand. Milo acquires it and wears it for a bit and fights some of Dorian’s goons while Stanley fights Dorian and knocks him out. Stanley eventually gets the mask off of Milo and onto him, and he sends Dorian’s men running for the hills and actually EATS the bomb before it blows. Dorian regains consciousness and tries to attack Stanley with a knife, but Stanley comically flushes him down a sewer drain in the club’s pond, presumably killing him. Once outside, a de-masked Stanley is caught by Kellaway and looks to be heading back to jail, but Edge City’s mayor Tilton (Ivory Ocean) inadvertently gets Stanley off the hook by telling Kellaway and the other cops that Dorian was the Mask all along, and he commends Stanley for saving everyone’s lives. Stanley, Tina, Charlie, and Milo take off with the mask.

The next morning, they go to a bridge, where Stanley intends to throw the mask back into the water where he found it. He and Tina step out, and he asks Tina if she wasn’t going to miss the Mask. She tosses the mask into the water and they kiss. Charlie then jumps into the water to get the mask, but Milo somehow gets into the water before him and swims off with it. Stanley lets out the Mask’s catchphrase of ‘sMOKING!? before he kisses Tina again. 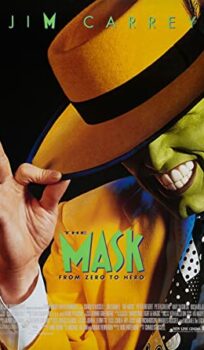