The small town of Milagro, New Mexico, is under a sever drought, due to the fact that a new golf resort under development and supported by the governor is stealing it all. Joe Mondragon, a local farmer, kicks the gate on his irrigation ditch, which cause water to spill into his field. Instead of fixing it, Joe decides to grow beans in there. His decision causes problems among both the community, and the government and the corporation building the golf course. The government and corporation don’t want to force him to turn it off, which would cause public relations problems. The locals start to get angry at the corporations attempts to strong-arm them into turning it off.

The situation gets worse. The corporation buys the services of a big-city cop (Christopher Walken, of all people), who beats up Joe Mondragon, and generally causes trouble for the villagers. The villagers arm themselves. It turns out that the oldest man in town, Amarante, has been creating much of the mischief (firing flaming arrows, shooting into people’s houses, etc.) in order to bring about a confrontation and kick out the corporation. In a final move, he drives a bulldozer into a ditch, in order to destroy it. In doing so, he also knocks down a fence into the beanfield. Amarante’s pig gets into the beanfield and starts eating the beans. Joe shoots it (it survives), Amarante shoots at Joe, and Joe shoots and seriously wounds Amarante and flees. The big city cop gets a posse together and goes after him. He plans to just kill Joe, but is stopped by a friendly corporation man.

In the end, Joe meets up with the cop and his reinforcements at the beanfield, surrounded by his friends and neighbors (all armed). The local sheriff stops the cop from killing Mondragon, and the governor decides to cut off his support for the golf course, effectively stopping the project. Joe is still going to be arrested, but Amarante, who survived, says he won’t press charges.

The village gets together at a big party to celebrate. 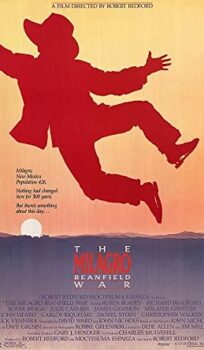