John Huston directed this 1961 western, which was the last movie made by Marilyn Monroe and Clark Gable, although they were only 35 and 59 years old when this was filmed. Montgomery Clift was the 3rd star from this movie to also die young.
The Misfits
(1961)

Roslyn Taber (Marilyn Monroe) has gone to Reno, Nevada, to get a quick divorce. Her car won’t start, and she gets a ride from tow truck driver Guido (Eli Wallach) to the court. He falls for her, but she shows little interest. That night, in a casino bar, they meet again. Guido is with his friend Gay Langland (Clark Gable). Roslyn falls for Langland, as he fits her image of an old west cowboy.

Langland and Guido want to make some quick money rounding up wild mustangs in the mountains. They need a 3rd man, and head to the rodeo to find one, with Roslyn along for the ride. They meet an old buddy Pierce Howland (Montgomery Clift), who is entered in the rodeo.  Pierce falls off the bull he is riding, and is kicked in the head.  As they head out to round up the wild horses, all 3 men are competing for Roslyn’s attention, leading to a lot of tension.  Langland plays the part of the tough stoic cowboy. Pierce plays the part of a wounded hero, down on his luck. Guido tries to play the part of the sophisticated and well read man of the world. (Guido fails at this, since he may be more cultured than the other 2, but he is still a hick tow truck driver.)

When Roslyn learns that the horses are being caught to be killed for dog food, she is upset.  This is worsened, when she realizes that all 3 men are putting on acts to impress her, and not at all what they pretend to be.  She breaks down, crying and screaming.  Pierce frees the horses. Langland captures the stallion again, only to free it right after, because he does not want anyone else making the decision to free the horses.  The 3 men angrily go off their separate ways. Roslyn drives off with Langland to an uncertain future. 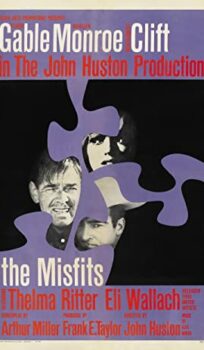