Brother William of Baskerville (Sean Connery) discovers that the blind librarian, Brother Jorge (Feodor Chaliapin Jr.) was the killer. Jorge was trying to prevent the discovery of a long-lost essay on comedy, written by the ancient Greek philosopher Aristotle. Jorge believed that laughter and comedy are evil, because they could lead sinful humanity to laugh even at God. Aristotle was a very influential philosopher, which meant that Aristotle’s endorsement of comedy was dangerous, in Jorge’s opinion.

Jorge had applied poison to the pages of Aristotle’s text, so that anyone who read it would get poison on his fingers, and would die later, whenever he put his fingers in his mouth.

When Brother Willaim confronts him, Jorge sets fire to the library, rather than let Aristotle’s text be revealed to the world. Jorge is killed in the fire, which spreads rapidly and destroys much of the monastery. Brother William escapes from the fire, after saving a few precious texts.

The fire at the library takes place just as the cruel Inquisitor Gui (F. Murray Abraham) is executing Remigio, Salvatore and the nameless peasant girl that Adso (Christian Slater) had made love to earlier in the movie.  Remigio and Salvatore are burned at the stake, but in the general chaos caused by the library fire, local peasants rescue the girl and kill Gui by pushing his carriage off a cliff.

Adso, now an old man himself, was the narrator of the film. As the movie ends, Adso tells us that he stayed with Brother William and remained a monk all his life, but never stopped loving that peasant girl, even though he never knew her name. 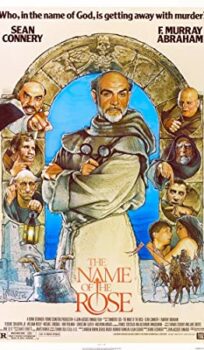