The Navigator: A Medieval Odyssey(1988)

In the year 1348, the residents of a small English mining town fear the approaching Black Death.  Griffin (Hamish McFarlane), a young boy, is known for his bizarre prophetic dreams.  The villagers agree that if a delegation from the village places a copper cross, from the village copper mine, on top of the tallest church in Christendom, they will be spared from the plague.  Connor (Bruce Lyons), Griffin’s older brother, is the only villager who has travelled extensively outside the village.  Connor leads the expedition.

Guided by Griffin’s dream, they decide to go thru the mine, thinking it will lead them to the other side of the world.  In an old, unused section of the mine, they find a modern-looking industrial metal ladder.  Climbing the ladder, they emerge in a modern 20th century city next to an expressway.  They are less startled than you would expect by the cars and skyscrapers and lights, as they assume they are in the “city of God” and expect it to be full of wonders.

They find the cathedral.  Griffin predicts that the person placing the cross atop the church will fall to his death.  He sees Connor climbing, and climbs up to stop Connor.  Griffin falls from the top of the church steeple.  As Griffin falls, he suddenly is startled awake.   They are still in the mine.  Griffin, fell asleep.  Everything in the modern world was a dream that Griffin narrated out loud in his sleep.  The others are convinced that Griffin’s dream saved the village, and because Griffin placed the cross in his dream, they are saved.  The village has a huge celebration.

Griffin finds some lumps under his arms- he has the plaque.  Griffin confront Connor, who admits he returned to the village knowing he was infected.  Griffin chooses to drown in the river rather than return and carry the plague back to the village. 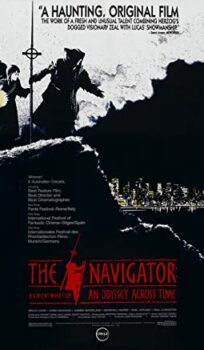