Hard-nosed reporter Carl Kolchak (Darrin McGavin) covers a series of strange murders in Las Vegas, wherein a superstrong madman has bitten the throats of several women and drained their bodies dry. The police, county sheriff and the D.A. are inept and would rather cover things up to avoid a panic, but Kolchak keeps stirring the pudding. Finally he tracks the vampire Janos Skorzeny (Barry Atwater) to his lair. Just as Kolchak and his FBI buddy are in the act of staking the thing in the rays of the morning sun, the sheriff busts in. To save the city untold embarrassment, Kolchak is given a choice: leave town and never speak a word of this affair, or do life in an asylum for Skorzeny’s murder. Kolchak leaves, but it is implied that he decides to tell the story anyway. 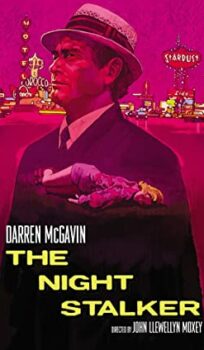