In 1952, Father Anthony Burke and Sister Irene (Demián Bichir and Taissa Farmiga) travel to Romania to investigate the apparent suicide of a nun. With the help of Frenchie (Jonas Bloquet), the man who found the nun’s body, they discover that a sinister and unholy entity has been released from Hell and is trying to find a vessel to roam the earth.

Irene learns from another nun that the demon, Valak, was summoned in the Dark Ages when a maniacal duke tried to gain the powers of Hell before he got killed and the rift was sealed, only for it to be reopened during WW2, allowing Valak to be free.

The other nuns in the abbey turned out to just be visions that Irene saw. She, Burke, and Frenchie find a vial containing the blood of Christ, which can be used to defeat Valak. After the demon nun attacks them, Irene manages to spit the blood in Valak’s face and send him back to Hell. Unfortunately, Frenchie (whose real name is Maurice) was left marked by Valak. He would later become fully possessed, and then later meet Ed and Lorraine Warren (Conjuring 2), making it Lorraine’s first encounter with Valak. 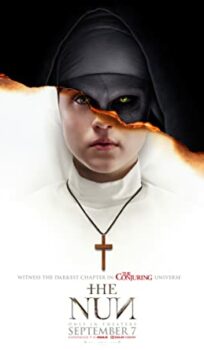