Gabrielle van der Mal (Audrey Hepburn) is a bright, young woman who chooses to enter the convent at a young age.  The daughter of a famous surgeon, Gabrielle has hopes of becoming a nun and being sent to the Congo where she can assist as a nurse at one of the missions.  Gabrielle takes the name Sister Luke and spends her first few years at the convent in Belgium, where she constantly struggles to uphold her holy vows – she is a free spirit and has a difficult time with the strict rules of convent life.

Years later Sr. Luke’s wishes finally come true and she travels to the Congo and becomes the surgical assistant to the talented Dr. Fortunati (Peter Finch).  When Sr. Luke becomes ill with tuberculosis, Dr. Fortunati treats her aggressively to allow her to stay in the Congo with him.  However, months later, an important but ill diplomat must return to Europe and Sr. Luke is sent with him to oversee his care.  She leaves the Congo and returns to Belgium. Shortly thereafter, World War II breaks out and she isn’t allowed to return to the mission. She has great difficulty adjusting to life in the convent and the strength of her vows is tested again.  Sr. Luke then learns that her father was killed during a bombing and that is the final straw for her.  She can’t find forgiveness in her heart for the German enemy or remain in the stifling convent.  She breaks her holy vows, leaves the convent and goes to assist Le Resistance with her nursing talents. 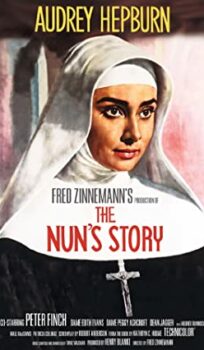