After Josey Wales (Clint Eastwood) loses his family to raiding Union soldiers, he joins a southern gorilla unit. When peace is declared, his friend Fletcher (John Vernon) is tricked into trapping his men and they are slaughtered.

Josey escapes and during his run from the soldiers, he picks up several lost souls, including Chief Dan George, Granny and Laura Lee (Sondra Locke). They meld into a strange family as they settle down on a farm once owned by Granny’s dead son but worried that his past will follow him, Josey tries to leave.

Unfortunately, the Union scum have finally tracked him down and in the final showdown, Josey and his friends manage to drive off the soldiers. Josey kills the man who destroyed his family and the townspeople convince the authorities that “Josey Wales” was killed. He and Fletcher recognize each other but decide to make peace as the war is finally over. 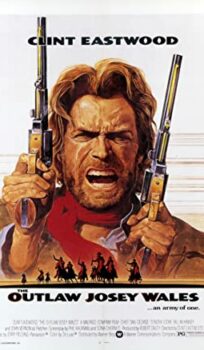