Short version:
After hours of research and fights within the paper, the headline THEY DIDN’T DO IT gets printed and the two kids get released.

Long version:
Henry Hackett (Michael Keaton) isn’t able to get the job at the “Sentinel”, because they found out he stole notes at the meeting to use them for his paper, the “Sun”. His very pregnant wife (Marisa Tomei) researches that the two killed businessmen had connections to the mob.

A police officer explains to the reporters that the two kids were arrested just for PR, and there is no case against them. Henry wants to “stop the press”, to print the headline THEY DIDN’T DO IT instead of GOTCHA!, but gets in a physical fight with manager Alicia Clark (Glenn Close) and ends up being fired.

At home, Henry finds his wife in trouble, and she is brought to the hospital.

After a discussion in a bar with reporter McDougal (Randy Quaid), Alicia feels guilty and wants to “stop the press” herself. However, while on the phone, she is accidentally shot in the leg by Sandusky (Jason Alexander) who was angry that the paper wrote so many nasty articles about him and got into a fight with McDougal. In the hospital, Alicia is finally able to call the printer and “stop the press”, so that the truthful headline gets printed.

Henry’s wife is saved and gets her baby.

The next morning at 7 o’clock, the radio announces that the two kids
have been released. 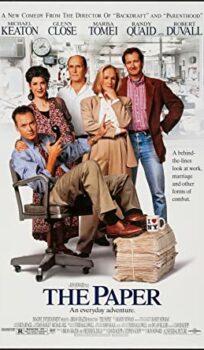